Pete won the senior event and once again Chris Mulford takes the junior trophy. Rob won the downhill.
Interesting to compare to the 2005 results HERE. Is this a case of time is not being kind to us! Pete’s winning time would have netted him 8th place back then.

It was good to see other members such as Bob (timekeeping), Ed Rieu, Peter Harber and Jon Coulson also out.

Club member Barry Robinson did what many talk about but few achieve when he completed an Iron Man event in Wales on 14th September.

We are told by Barry that “The sea swim had a heavy swell and was hard work. The bike course was hilly and technical and was very well supported. I did the bike split in 6.13.45 and then hung on in the marathon which was around Tenby and finished with a total time of 13.26.34”. A top result, hats off to the man! 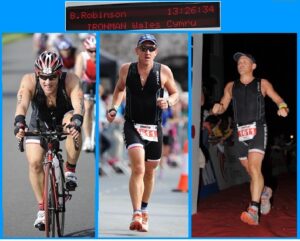 Even though there was a lot of notice and promotion of this event in the end only Rob Royston and Dave Twin appeared on the start sheet for this Fred Peachy memorial event. As the club is 125 years old a lot of effort was put into the event with free water bottles for all riders and an amazing prize list. The morning was bright but a little cooler than recent weekends. The strong winds of the previous day had died down a lot, with the breeze being against you on the longest leg from Ashford to Leeds. Dave was the first of the club duo off and finished in 1.03.05 (29th). Rob rode even better on this sporting course to finish in 1.01.26 (20th). It looked like a bit of a fix as there were prizes for being closest to pre-specified times and Rob and Dave won £12.50 each for being closest to 1.01.30 and 1.03.00 respectively. The overall event was won for a third year by Kevin Tye, VeloRefined Aerosmiths in 52.46 who picked up £125.00 for his efforts.

Mark Yuelett rode used this club event run by Maidenhead % District CC to break a 6 year time trialling drought. Riding his first event since 2008 he completed the H10/2 course in 23:55 to finish 5th out of 42 starters. A great ride for the first race back after such a long lay off.

Rob Royston, Dave Twin and 2nd claim member Mark Newton all made the long journey up to the Cambridgeshire, Suffolk borders to ride this fast course based on the A14 and A11. The weather was overcast with a stiff breeze coming from the North West which was a definite bonus on the way out but made the return leg hard going. Rob was the first of the trio to start and finished in a very respectable 56.23 (80th). Dave was next, but suffered a mechanical when his cassette lock nut came loose and the gears were trying lock up. Annoying as he was averaging 27.9mph at the time. Mark followed recording 53.05 (33rd), being the third fastest time he had recorded on this course. The overall winner was Matthew Smith, Team Velovelocity.co.uk in 48.34.

Dave Twin was the sole representative in this event. The forecast was for heavy showers and as a result there was quite a few DNS’s, in what was not the biggest field to begin with. It was actually a warm muggy morning with a bit of a cross/headwind that met the riders on the return leg and no rain during the event. Dave finished with a 24.31 (17th). The winner was Nick Malins, 4T + Velo Club in 21.16

Ran cautiously for the first half, had a bit of a rough patch 19-21miles, cramp in my thighs for the last three miles, but really pushed on the best I could and on approaching the finish line could see I was on to a good time, a small three way sprint with some fellow runners and crossed the line on 02:59:01.

On reflection I lost about 2 mins on the run in, found out in the medical tent that cramp was the reason I couldn’t walk once over the line! On the plus side got some good advice for future races to avoid or at least postpone the cramp until as late as possible in a race.

A short Video clip of the finish, a bit of a sprint and crash……just like on the telly, look at the bottom and click on ‘finish’…amusing. VIDEO

Fast And Furious Duathlon
A chilly, but reasonably still morning (rather than last years flooded swim on a bike) welcomed Matthew Preston and I. A run of just short of 5km with a few humps and bumps got things off to a sensible start. A good transition got had both of us on the road without any hitches. I managed to pass four people on the bike and had the usual nervous final run of hoping that enough distance had been made to keep the faster runners away for the final “Why am I doing this” 5km run. Thankfully this was achieved by a comfortable 53 seconds, whereas Mathew had a lot closer battle towards the end performing the classic double sprint to fool the final person he passed in the last few yards, awesome finish.
Grant 1:11:09 (1st 50+, 9th overall)
Mathew 1:18:29 (9th 40+, 17th overall) getting over classic running injury so more to come!

The winner was Carl Ferri in 1:02:46 beating the course record by 2 minutes from Ian Stannard’s (British Pro triathlete) old record. Impressive stuff and Carl is 44!

Dinton Duathlon
Arrived on a frosty morning in a field somewhere near Reading. A bit of breeze, but calmer than the previous weekend.

Mass start so the normal lunatics running off as it’s a 100mm sprint, gradually worked my way through the field a nice flat 5.25km run and pulled into transition 9th. Fumbled the lid a bit in transition, jumped on the bike and wound it up slowly for a reasonable ride. Forgot to take my feet out of my shoes before jumping off the bike (silly boy) but did a reasonable transition before the dreaded last run. 1 km as usual legs of lead and lungs of stone, but gradually eased up, not a great run, but enough to hold my position with time to spare for the normal snot faced finish, 1:17:13, 1st male over 40 and 50, 4th overall. Winners time 1:12:46, so a lot of room for improvement.

Once again the Sydenham had a good turnout for this SPOCCO South East event with five members taking part. The conditions were bright and chilly with a bit of a breeze on the return. First rider off in the whole event was Bob Loader who recorded a time of 2.24.55 (55th). Second Sydenham rider was Richard Hallett with 1.46.52 (16th). Then came Robert Royston with 1.48.19 (21st). Dave Twin finished with 1.54.11 (34th). Grant Beerling brought up the rear with a 1.57.53 (42nd). As a result of their great rides Richard and Robert picked up £10.00 each as highest on standard team of 2. The overall winner was Steve Dennis, East Grinstead CC in 1.37.12.

Another bright morning welcomed riders down at Lenham Village Hall for this solos and 2up TTT event. Going out for a warm up there didn’t appear to be much breeze, but by the time the event got under way this got up with most riders commenting on how hard it was on the long leg from Ashford to Leeds. Unfortunately Richard Birtwhistle’s entry turned up late at the organisers so he didn’t make the start sheet. This left just Dave Twin and Grant Beerling (riding his first event in about fifteen years) representing the club. Dave did a 1.05.18 (12th) and Grant a very creditable 1.05.47 (13th). 2nd claim member Ben Wimpory finished second in 56.45 to his team mate Chris Fennell with 56.17, both riding for PMR@Toachim House. In the 2up event another 2nd claim member Matt Miles won in 54.27 riding with Connell Yates riding for In-Gear Quickvit Training.

This early season classic saw a reduced field this year mainly due to people starting their training later as a result of the bad weather. The weather also had an hand in reducing the course from its usual 29.9 miles as a of part of the Flanchford Bridge having been washed away by the flooded Mole River. The event therefore was started on Reigate Heath and the remaining field of riders were actually met by good weather conditions of clear skies, some spring warmth and light winds. The club had 4 members participating. The best placed was Richard Birtwhistle with 1.07.53 (23rd), next was Robert Royston with 1.09.53 (37th), followed by Dave Twin with 1.11.10 and bringing up the end of the field was Bob loader with 1.33.02 (75th). The event was won by Liam Maybank, Twickenham CC in 1.01.18. Full result available HERE!

Second claim members Ben and Jon started thier campaigns for the year at the Coalville Wheelers 10 last Sunday. They both turned in impressive times, especially given the time of year. Ben even collected some prize money for 3rd place in 22:25 and Jon also in the mix with a time of 24:10 for 17th. Full result available HERE!

Main course, a dessert, Tea or Coffee, Price £15/head – half price for children’s portion (can be the adult main/dessert in smaller portion)
Please contact Rob Royston of your choices by Wednesday 5 March.

Hope everyone had a good Christmas and New Year. Wishing everyone safe and fast rides for 2014.

Don’t forget in addition to using this website to stay up to date with what is going on in the club you can also follow on us on Twitter for the latest on group rides, events and results.

Sydenham Wheelers Guidance for Interclub TT entrants during Covid
We use cookies on our website to give you the most relevant experience by remembering your preferences and repeat visits. By clicking “Accept All”, you consent to the use of ALL the cookies. However, you may visit "Cookie Settings" to provide a controlled consent.
Cookie SettingsAccept All
Manage consent

Analytical cookies are used to understand how visitors interact with the website. These cookies help provide information on metrics the number of visitors, bounce rate, traffic source, etc.

Other uncategorized cookies are those that are being analyzed and have not been classified into a category as yet.

SAVE & ACCEPT
Powered by